The Violent Kind - interview with The Butcher Brothers

I met with The Butcher Brothers, aka Mitchell Altieri and Phil Flores. They were exhausted. They had been working around the clock editing The Violent Kind in order to be ready for Sundance. 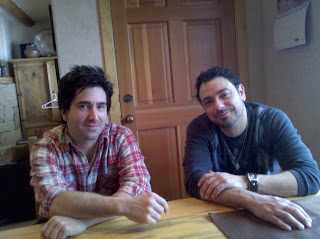 I noticed a Sam Raimi / Evil Dead influence in one aspect of the movie. They said that wasn’t necessarily put in as an Evil Dead reference, but that his style and flavor are in the movie. Besides Raimi, their biggest influences were David Lynch, Roman Polanski, and David Cronenberg. They really enjoy movies that start in one direction then take a huge turn in a completely different direction that you don’t see coming. That influenced not only The Violent Kind but also their previous film, The Hamiltons.

They like to keep audiences on their toes. As soon as you think you have the movie figured out, they spin it so it goes in another direction, and they are pretty hard turns. When writing, they are constantly trying to challenge themselves. If it keeps them interested, they hope it will keep the audience interested.

They said the movie only took 2-3 months to write. They have been working together for about 15 years so they know what each other likes. This means there aren't a whole lot of arguments. They know each other's style so they know what they are going after.

Surprisingly they didn't even know what the movie was going to be when they pitched it to the producers. Their main producer on the film was Michael Ferris Gibson, who also produced The Hamiltons. Most of the same cast and crew from The Hamiltons worked on this movie. They like to keep it in the family, which helps make a difficult shoot bearable. At times they had 9 people in a room shooting for several days, so its important that they all know they can rely on each other. It was a quick shoot, but very tough. 21 days, shooting 6 pm - 6 am every day. About 3 am everybody gets into as weird state and starts walking around like zombies. Which is part of the fun. And even though it was summer when they filmed it, they were up in the Redwoods and it was cold at night.

I asked about their early days together and how they got into the industry. They said they basically just started making movies together. At first it was just the two of them, using a video camera and operating their own boom mic. They did everything themselves and made short films, which turned into making bigger films, then The Hamiltons took off and that is when The Butcher Brothers were born. They decided it would be a good idea to have an alter ego to channel some of their darker content.

One thing they strive for in their movies is to make them very character based. Their movies are not just straight horror but has comedy in it as well. If you take the horror out of their films, you would still have a good movie.

I asked about their top horror (or thriller) movies of all time, and they mentioned Mulholland Drive, The Shining, and Angel Heart. Coincidentally I saw Angel Heart for the first time a few months ago, so we spent a few minutes just talking about that movie.

They mentioned that their next movie will be called Black Sunset. It will be about a group of surfers that head to Mexico and end up turning on each other. They said it would be like Lords of Dogtown meets The Shining. They don't know where the movie will be filmed yet, but they would love to shoot in Baja.


You can see The Violent Kind at Sundance thru January 31st, and The Hamiltons is available on DVD.