First up was a press screening of Taking Chance. Kevin Bacon plays a marine who is escorting a fellow marine's body home to Wyoming. The movie was 85 minutes, but it felt like 120. You really have to be patient to sit thru this movie. The first 10 minutes in, I thought about leaving. But I stuck it out. I will admit, it made me tear up. But it hits you over the head with the emotion of a fallen marine. Too many slow motion shots of Kevin Bacon watching the coffin and saluting.

After that, I went to the premier of The Greatest. I wasn't able to get in to the movie, but I was able to get pictures and sound bites of Pierce Brosnan and Susan Sarandon. I tried to get a couple of questions in, but its hard fighting with TV reporters from Access Hollywood, Reel Talk, ect. 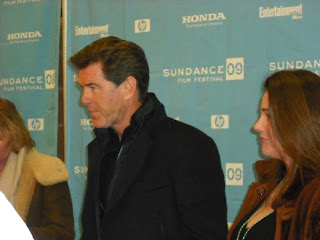 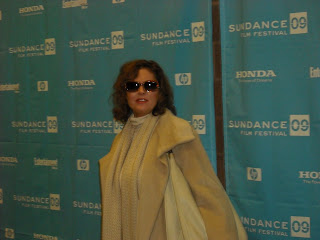 At the moment, I am updating from the Sundance Cafe. I'm trying to decide what to see next. There are so many choices. But I think I am going to focus on seeing more movies, and less celebrity premiers. I think. I may change my mind. Jim Carrey is supposed to be here tomorrow and then John Krasinski (The Office) may be here Monday.

Update: I ended up seeing two more movies. The first was the Documentary Shorts. Most of them were not very good, but the best one was I Knew It Was You, a 40-minute documentary about John Cazale. It was really good.

The last movie I saw was Rudo Y Cursi. Gael Garcia Bernal and Diego Luna from Y Tu Mama Tambien starred. It was not bad, but definitely not as good as Y Tu Mama Tambien.
Posted by Mike at 2:31 PM