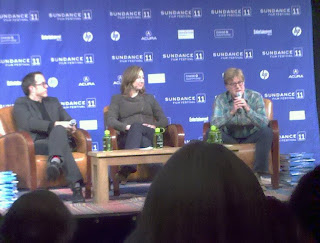 Day one at Sundance. This afternoon Robert Redford, Keri Putnam (Executive Director) and John Cooper (Director) held their annual press conference to kick off the festival. Here is one short video from the press conference. Excuse my shaky cam style. I was sometimes trying to film with one hand.

Update: I also went to New Frontier to check out the exhibits. I took a few pictures but they didn't come out. It was too dark.

In years past the New Frontier has been on Main Street, but this year it is being held at the Miner's Hospital. Not as good a venue. Instead of having everything on one level in a big open space, everything is crammed into 3 buildings. The main building is very cramped and darkly lit. As you are walking through it is hard to tell what is an exhibit and what is an employees only type area.

The exhibits are pretty interesting, but I was disappointed with the Three's Company: The Drama setup. It is just a room where footage from the first season of Three's Company plays. The dialogue has been re-recorded by James Franco and his friends. They try to make it a drama rather than a sitcom.
Posted by Mike at 8:38 PM